The Best Music In The World This Week has me talking Lionel Richie, a love song about a bear attack (seriously), motorbike accidents, and more. I hope you enjoy.

Toronto’s Hayden Desser is far from a household name, even in his native Canada, let alone the United States. Thus, I think most of us Hayden fanatics feel good about the fact that we’re “in the know;” or, aware and appreciative of such a wonderful talent.

How many songwriters could pen a song about a fatal bear attack that is moving, funny, and romantic at the same time? The late Warren Zevon in his prime, perhaps. And…? That’s about the only one I can name–other than Hayden.

I listen to Hayden a lot when I’m missing Ontario in certain moments… The guy just sounds like long drives on highways carved through the rock, the magnificent changing colours of autumn. You also get the sense (from his music, at least) that he possesses two fundamentally Canadian characteristics–unfailing politeness, and humility. I miss my home now and then, and when I do, I listen to Hayden.

“Killbear” is lovely, and worth a listen if only for the lines:

I would’ve yelled and banged pots…

Sage advice if you’re ever confronted by an aggravated bear.

You can file this one under “guilty pleasure” if you’d like, but I’d like to challenge you if you do.

It’s a bit cheesy, sure, but it’s also just a beautifully crafted piece of music. Lionel delivers a sensitive and sincere vocal performance, the band is tight (as always), pretty/weird guitar solo in the middle, a great bridge. I don’t care what you say: “Easy” is easy to like, and more musically sophisticated than it’s often given credit for.

I was involved in a (very) minor motorbike accident this week, and I must confess that it prompted a bit of stress. (I’m ok, Mom, don’t worry.) Two days later I was still slightly shaken up, and I put on “Easy” and all of a sudden everything seemed OK again. Then I remembered that I’ve been turning to this track in moments of stress ever since I was about 12 years old.

The good news: I’m alright and the bike is OK and life is good when you’re listening to the Commodores, guilty pleasure or not.

I liked The War on Drugs’ latest effort Lost in the Dream when it first came out, but I didn’t love it. At least not as much as like-minded critics and friends suggested that I should. As the year draws to a close, I’ve been turning to the album more and more in an effort to better understand and appreciate it, and let it sink in a bit more.

I still think the band needs to learn how to write a good bridge–the album is lacking in this respect–but the more I listen, the more I’m taken by the album. Like all albums that stand the test of time, the listener benefits, and the music becomes more clear and engaging, upon repeat listens.

This song was involved in several video montages paying tribute to the recently deceased hockey superstar Jean Beliveau, and upon watching I was both gratified and reassured that Leonard Cohen is still making great music. (The song appears on his just-released LP Popular Problems, which I hadn’t yet heard.)

I dig the fact that his voice continues to get lower, deeper, with age. I prefer his growling bass to his subdued baritone from decades prior. I’m also encouraged by the fact that, even as he pushes 80, Cohen has more great music in him, and I’m curious to hear what he’ll be doing in five, or even ten years.

Here’s to many more years of Leonard Cohen.

This song stirs something in me… a strange combination of nostalgia, sadness, and optimism, mixed with just a hint of regret.

What initially caught my attention was the line “Strangest stranger that I ever did meet.” We’ve all met strangers like that, I think–the ones who leave a serious mark, and days later you’re not quite sure where they came from, while at the same time fairly certain that you’ll never see them again.

If we live well, true, and are honest with ourselves in every moment, some casualties along the way are inevitable. The most important lesson to take away is to keep swimming, always.

Zachary Stockill
« Previous Post The Best Music In The World This Week: Nov. 30, 2014 Next Post » On The Difference Between Being Needy, And Owning Your Desire For Something (Or Someone)

Ep. 18: I’m Your Man: Sylvie Simmons on Montreal, Making Music, and the Life of Leonard Cohen 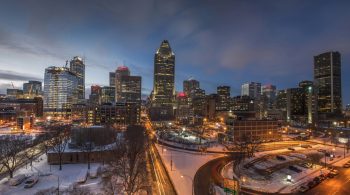 Ep. 18: I’m Your Man: Sylvie Simmons on Montreal, Making Music, and the Life of Leonard Cohen